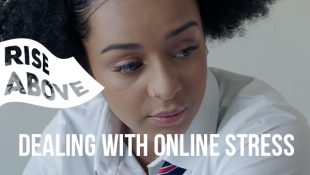 That’s our core approach on our Rise Above youth campaign when developing engaging content to ensure that it resonates with our core audience. Rise Above is all about helping 11 – 16’s delay or prevent exploratory risky behaviours such as smoking, drinking alcohol or engaging in first time sex. By tackling multiple behaviours, it aims to build and improve the all-round resilience of young people.

Rise Above works in partnership with various youth groups and youth social networks to co-create our films. One great example of using digital to co-create and deliver insights from young people at every stage of development is via the Bulbshare App.

Bulbshare is a next generation mobile platform that connects you to your core community or social network of young people. Based on policy objectives mapped to topics that are matter to teens, we provide a brief or multiple briefs for suggested new Rise Above content e.g. online stress, exam stress and body image. We then hold 3 hour workshops for each brief to inspire the young people and build conversations on our topics.  Young people will interact with the app and deliver content in many formats from photos, memes, videos, snapchats, texts to support their authentic views or stories and examples from school or their friendship groups.  All participants can engage with each other and ideas will grow and form from their group discussions and shared experiences of the issue. As a client we can also interact with the young people to formulate concepts. This form of digital networking generates instant content and real time validation for concepts and treatments for films based on what will resonate most. By building an always-on relationship with our audience, we can also get a real time identification of taste makers, early adopters and opinion leaders within the social network and incentivise them to share our content to increase reach.

From the wealth of insights we’ll then map to key policy comms messaging to develop the final concept and treatment for a film. We’ll also use these young people tribes to feedback and approve scripts, edits and visuals to make the most authentic film possible.

Which leads us into the use of influencers, the Rise Above approach has been carefully developed and crafted to maximise credibility and appeal with its youth target audience. It is rooted in the evidence-based Prototype Willingness Model (Gibbons and Gerrard, 1997) for driving youth resilience. This shows that a core determinant of risky youth behaviour is risk image i.e. how much they want to be like either the type of person who takes risks (or the type of person who doesn’t take risks, a risk avoider).

Rise Above influences risk images by using aspirational vloggers who talk about how they reject risky behaviours; i.e. social media celebrities (inc. YouTube & Instagram, Snapchat etc.) and heroes who are successful in the various genres of youth entertainment (inc. music, sport, film, fashion). This increases the desire for our core audience to act like a risk avoider and therefore positively impacts youth behaviour across a number of issues to build resilience.

Early intervention pays the greatest dividends in public health. Half of the most common health issues in adults are driven by modifiable habits and behaviours formed during adolescence. Moreover, the earlier the risky behaviours begin the greater the harm later in life. Rise Above supports a number of PHE’s priorities, specifically: ensuring every child has the best start in life, reducing smoking and discouraging its uptake and reducing alcohol related harm for 11 – 16’s.

Our Rise Above’s digital platform hosts various popular video formats including interactive pick a path films, comics, quizzes and an answer wall and videos from vloggers. So check us out here at riseabove.org.uk. It’s all about young people sharing their experiences, challenges and questions to get them ready for whatever life throws at them. So get involved, get talking and get others talking too…