The ‘transformed’ health visiting service now has a four-level service model. The four levels of service model, from universal to more targeted, enables health visitors to give individualised support to families depending on the situation they are in, ultimately improving outcomes and tackling inequalities.

Health visitors in Barnsley have provided an antenatal and postnatal education programme for mothers. The programme has an integrated approach with other services including children’s centres, midwives and breastfeeding link workers. This started as a targeted programme, but has now been mainstreamed to be universally available.

Barnsley is the 43rd most deprived local authority in England out of 354, and is the 4th most deprived in Yorkshire and the Humber out of 21. Over half the population lives in areas that are in the 30% most deprived areas in the country. This impacts negatively on their life chances, putting them at greater risk of poor outcomes.

Evidence indicates that a focus on improving the life chances of more deprived children is required to tackle both the intergenerational impact of child poverty – increased ill health, unemployment and criminal activity – and the subsequent public service cost, which is estimated to be between £10-20 billion.

The ‘Having a Baby’ (HAB) programme aims to reduce inequality through a strengths-based approach to enhance and build upon skills and knowledge, increasing parenting capacity and boosting self-esteem and confidence.

Families are engaged with this programme at the earliest opportunity. This means that their needs are identified sooner and interventions can be brokered earlier, thereby hopefully preventing a later reliance on more specialist support. The programme is underpinned and validated by the best evidence (Preparation for Birth and Beyond (2011)) resource which embeds the learnings and positive outcomes from the local and national Family Nurse Partnership programme, including:

The programme has been rolled out through children’s centres in Barnsley. During 2013, 54 HAB programmes were run with 360 pregnant women attended.

The percentage of pregnant women attending parenting classes in 2013 increased to 29.5% compared to attendance of 20.1% in 2011/12. And 310 support partners attended the HAB programmes with pregnant women, with 292 (94.2%) of these being expectant fathers. Take-up was high in more deprived areas, with 43.6% of women accessing the programme from the lower 30% deprived areas of the borough. This is a significant amount of families that are from the borough’s most disadvantaged areas.

The programme also had a significant impact on outcome measures.

Only 16 of the 360 women (4.4%) were reported to be smoking at delivery compared to the borough average of 21.9% for 2012/13. Only 17 women who accessed HAB were recorded as having a high Edinburgh Postnatal Depression Scale (EPDS) of 12 or above.

Alongside tracking and monitoring of each individual accessing the programme, qualitative evaluation was also undertaken at the end of each programme. The combined qualitative and quantitative data indicated that this multi-agency approach has demonstrated significant improvement in the health outcomes for families and their children in Barnsley. As a result, the Having a Baby programme has been mainstreamed as part of universal provision, with a targeted approach currently being undertaken with more vulnerable groups. 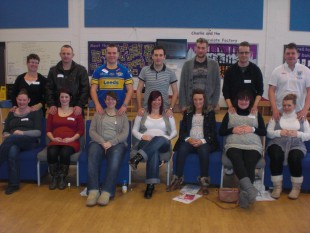 The programme has been rolled out through children’s centres in Barnsley. During 2014, 52 HAB programmes were run with 397 pregnant women attending: 370 women were from the Barnsley Borough and 27 were from outside the Borough but had booked to give birth at Barnsley hospital.

356 support partners attended the HAB programmes with pregnant women, with 339 (95.2%) of these being expectant fathers and same sex partners. Take-up was high in the more deprived areas of the Borough, with 170 (45.9%) of women coming from the lower 30% deprived areas. This is a significant amount of families that are from the borough’s most disadvantaged areas.   This data excludes the 27 women who came from outside the Borough.

The programme also had a significant impact on outcome measures in 2014.

6-8 week sustained breastfeeding for the 370 women who were from Barnsley (27 were from outside the Borough) showed that 177 (47.8%) women were still breastfeeding (compared to the Barnsley average of 30.1%)